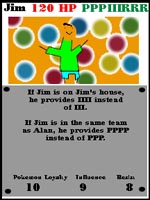 A card game featuring me and my friends.

I had previously been designing some custom Pokemon cards, and wanted to build a game featuring my friends instead. This was my first attempt. It didn't go so well.

I don't remember what the game was supposed to be about. From the cards, it would seem that you were collecting Pokemon Loyalty (P), Influence (I), and Resist (R) to meet certain criteria, and formed teams of people to do so.

Only two cards were made, and both were cards featuring people. Presumably, there would have been card types for locations